Winds is a beautiful open-source RSS and Podcast app created using React & Redux on the frontend and Express.js on the backend. Use the free hosted version or run it on your own server and customize it as you see fit. Contributions in form of pull requests are always appreciated. Activity Feeds & Discovery in Winds are powered by Stream, the app leverages Algolia for search, AWS for hosting, MongoDB Atlas for a hosted database (DBaaS), and SendGrid for email. All of these services have a free tier.

To get started with Winds, please download the latest release

In addition to the desktop apps for macOS, Linux, and Windows, there's now a web version of Winds available at https://winds.getstream.io/

Have a popular RSS or Podcast and want to be featured? Reach out to winds@getstream.io. We reply to every message.

Features at a Glance

Winds is packed full of awesome features behind a beautiful user interface and user experience. Here's a quick look at what the project has to offer: 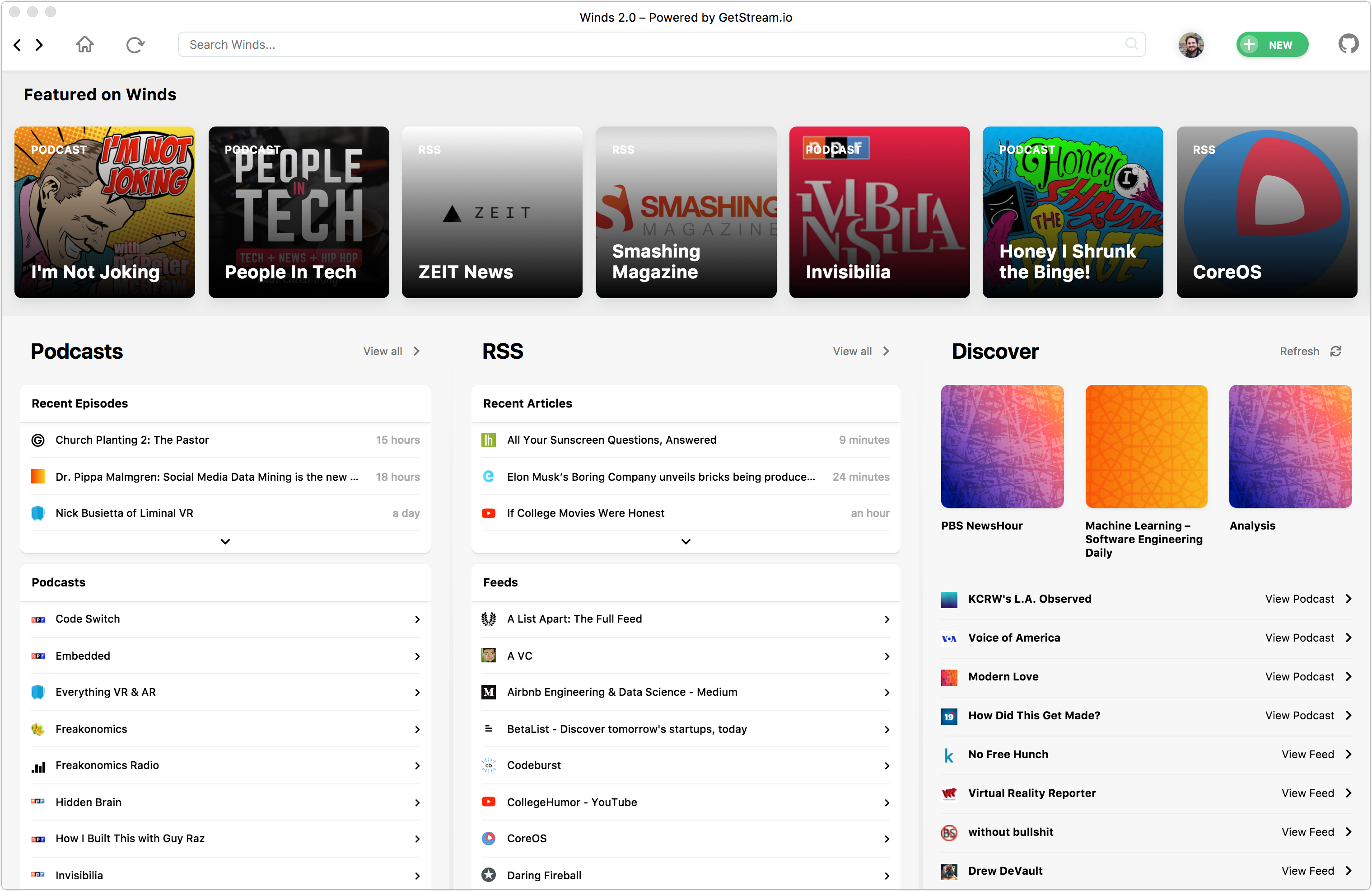 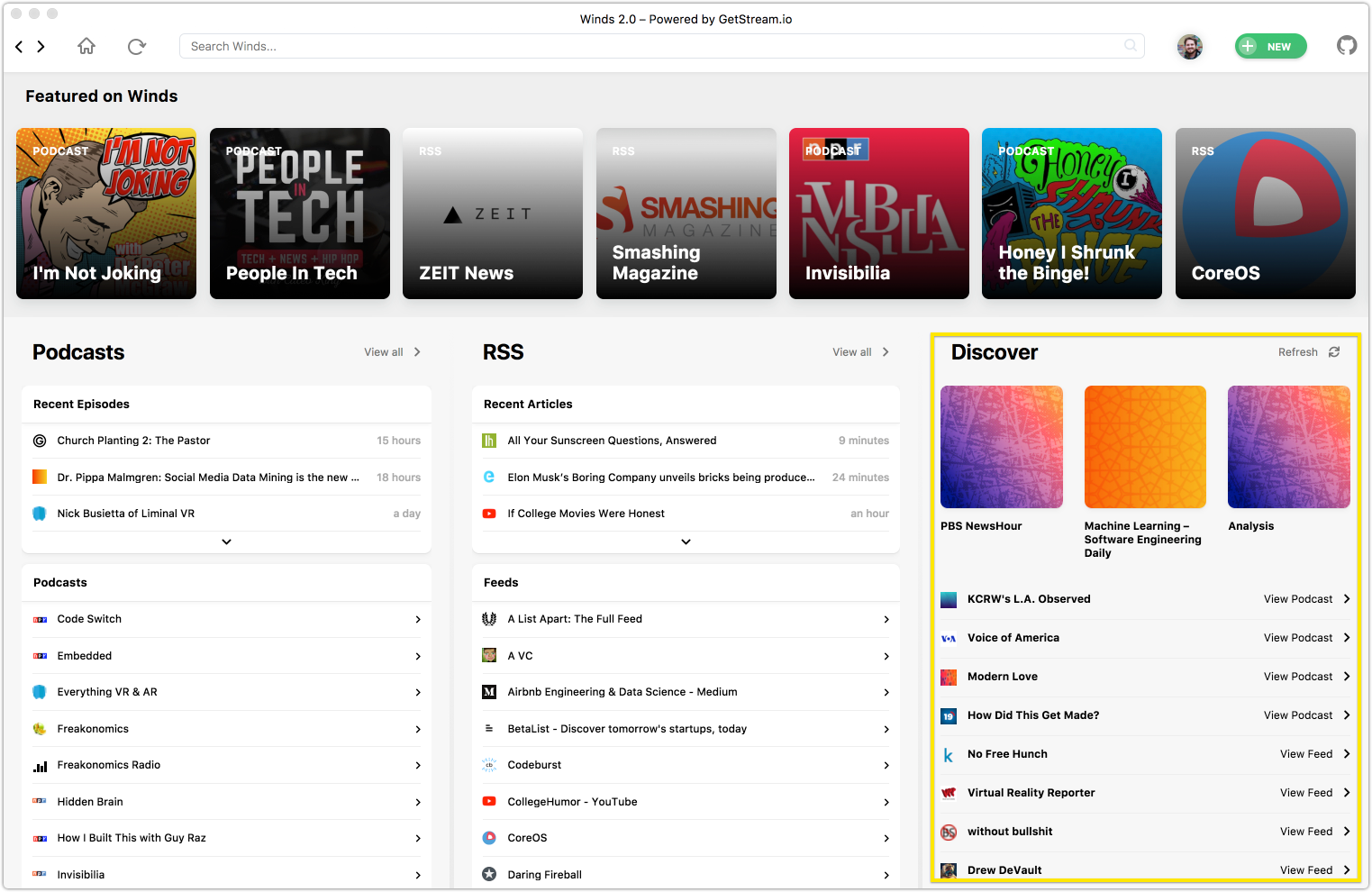 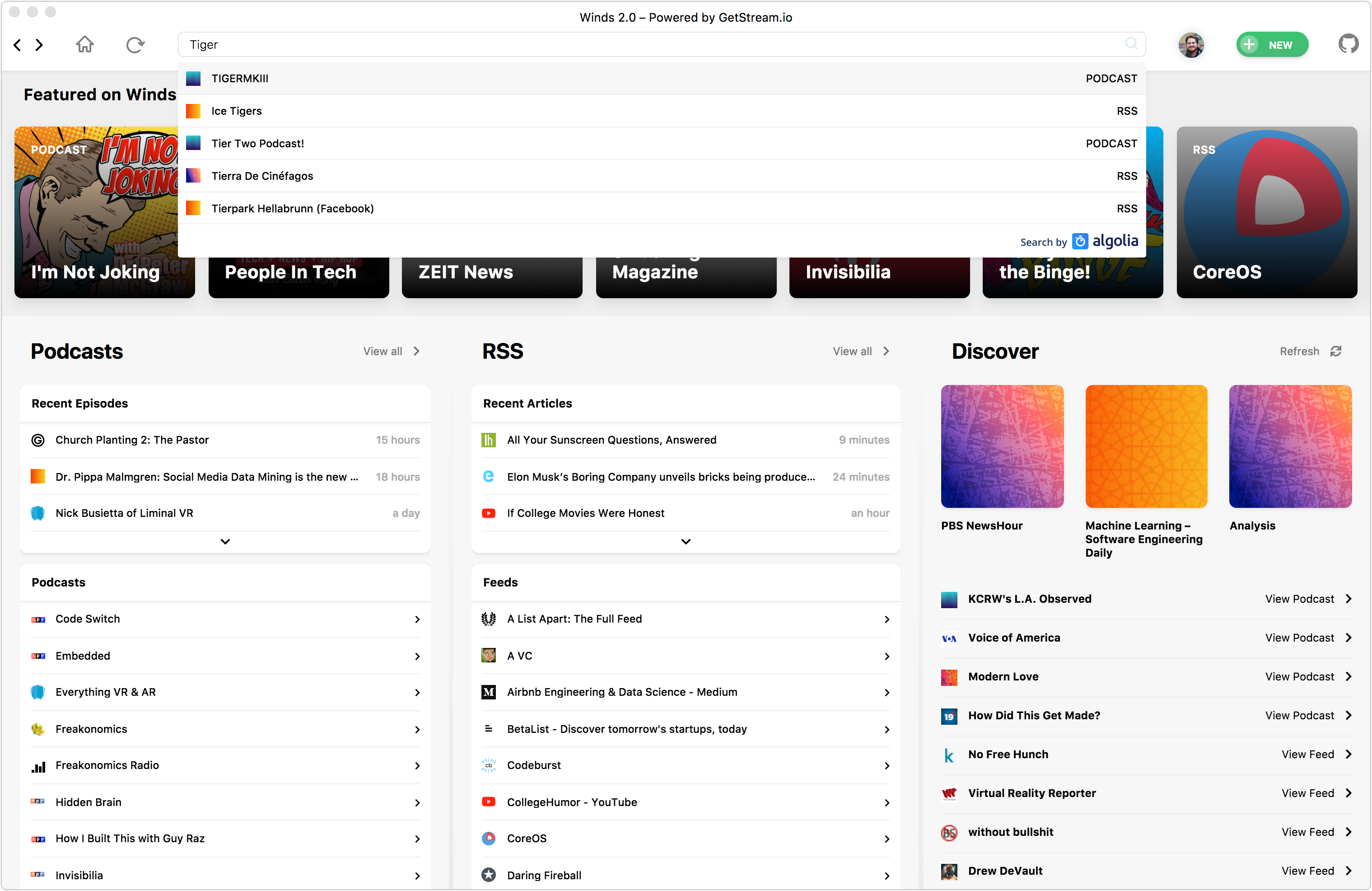 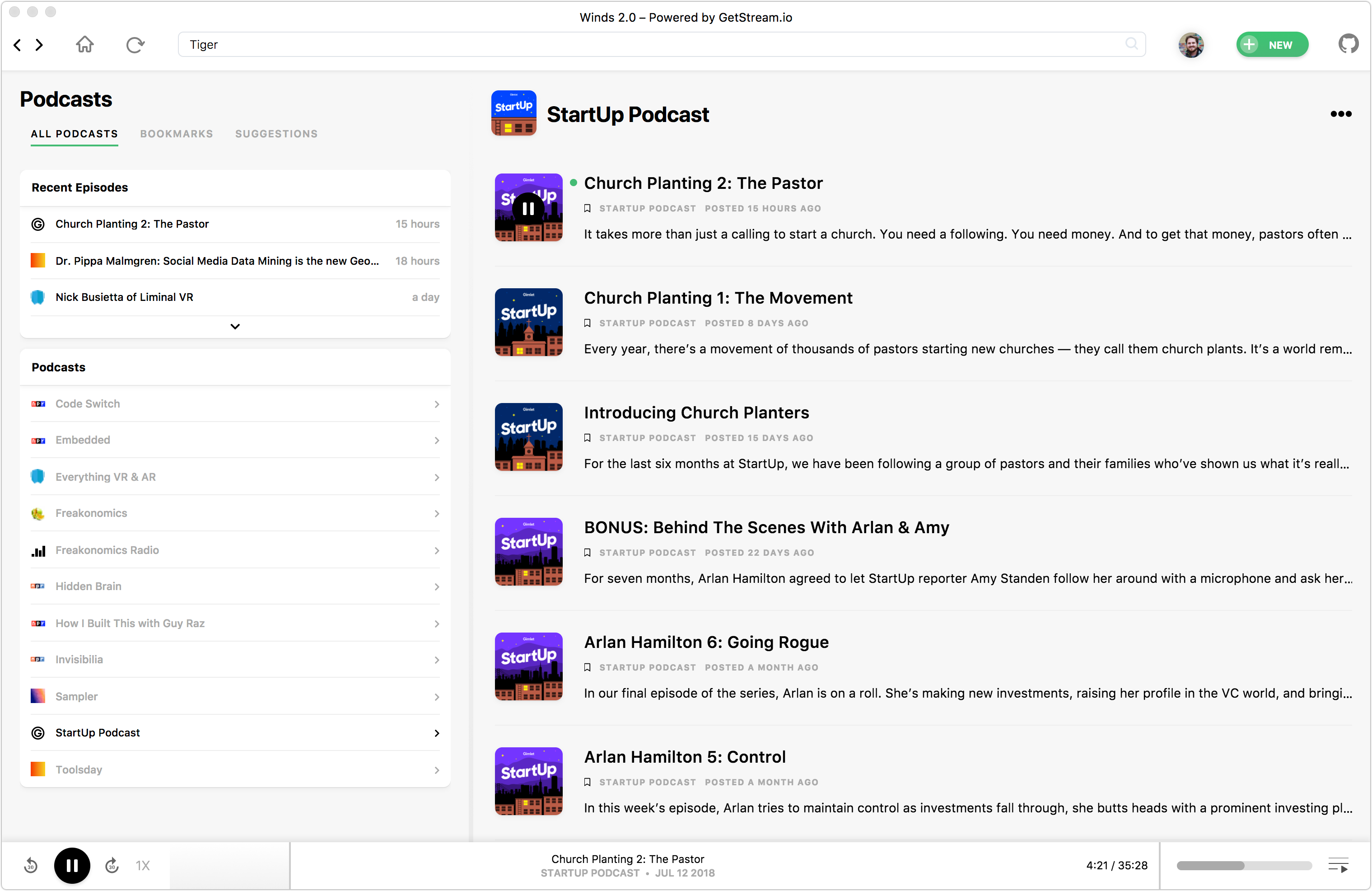 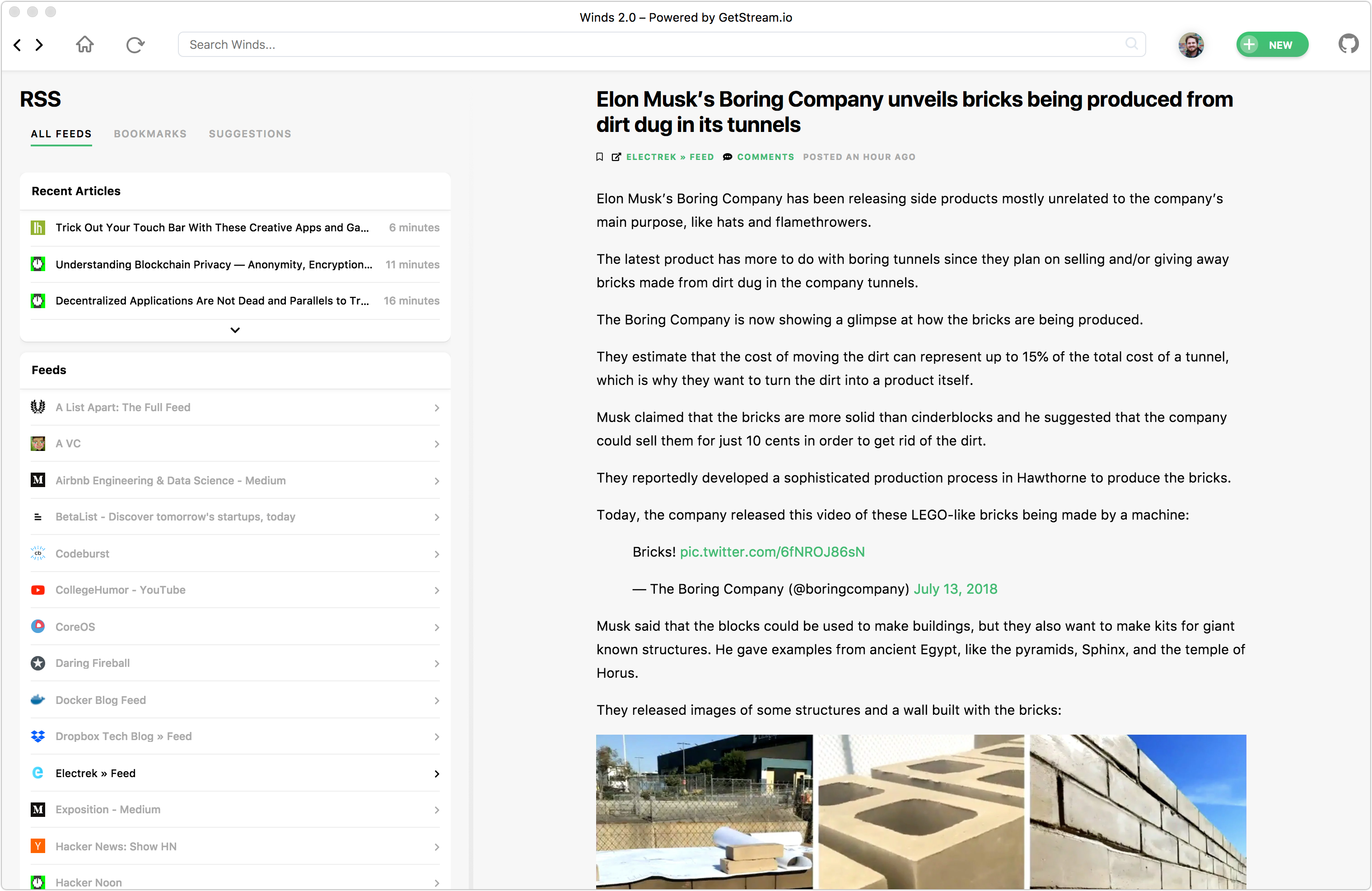 Help us improve Winds and/or vote on the Roadmap for 2.1

The full stack can be found on StackShare.io.

Stream is an API for building activity feeds. For Winds the follow suggestions and the list of articles from the feeds you follow is powered by Stream. Stream accounts are free for up to 3 million feed updates and handle personalization (machine learning) for up to 100 users.

Algolia is used for lightning fast and relevant search. We use their JavaScript search client to easily setup the Winds search implementation. Algolia, accounts are free up to 10k records and 100k operations.

MongoDB Atlas provides a Database as a Service, and serves as the backend datastore for Winds.

The following tutorials will not only help you start contributing to Winds, but also provide inspiration for your next app.

Note: We're actively working on this portion of the README. To stay up to date with the latest information, please signup for the hosted version at https://getstream.io/winds.

Sign up for both Stream and Algolia, and create the following .env file in the app directory, replacing the keys where indicated:

Note: If you are running the test suite, you will need to have a test version of the .env file inside of the api/test directory.

The following instructions are geared towards Mac users who can use brew (Homebrew) to install most dependencies. Ubuntu users can use apt, and Windows users will have to install directly from the dependency's site. Non-debian-based Linux users will probably be able to figure it out on their own :)

If you're on a Mac, you can install MongoDB through Homebrew by running:

(You can also install MongoDB from the official MongoDB site.)

You can also run MongoDB in the background by running:

At Stream, we use Redis as an in-memory storage for the Winds podcast processing and RSS processing workers. It contains a list of podcasts and RSS feeds, which the workers pick up and process using the bull messaging system.

If you're on a Mac, you can install Redis through Homebrew by running:

(You can also install Redis from the official Redis site.)

Then, start Redis by running:

...which creates (by default) a dump.rdb file in your current directory and stores a cached version of the database in that location.

You can also run Redis in the background by running:

For testing purposes, you will want to use the test data located here.

Use mongoimport or mongorestore to import the data. There are two username and password combinations for testing:

You will need to run the FLUSHALL command in Redis to ensure that the new content is picked up.

Note: This will override any local data that you may have. Please be cautious! Also, this will not create Stream follows – please follow feeds manually to generate them.

To contribute to Winds, sign up for Stream to utilize the activity and timeline feeds.

(Reminder: Stream is free for applications with less than 3,000,000 updates per month.)

Add your Stream App ID, API Key, and API Secret to your .env

Once you've signed in, create "feed groups" for your Stream app.

A "feed group" defines a certain type of feed within your application. Use the "Add Feed Group" button to create the following feeds:

It's fine to enable "Realtime Notifications" for each of these feed groups, though we won't be using those yet.

Sign up for Algolia and Create an Algolia App and Index

In addition to Stream, you also need to sign up for Algolia, to contribute to Winds, for the search functionality.

(Algolia is free for applications with up to 10k records.)

From your app, click the "API Keys" button on the left to find your app ID and API keys.

Append your Algolia application ID, search-only API Key and Admin API Key to your .env file to look like this:

From the root directory, run:

To see logging information for all processes, run:

Tests are located in api/test folder.

Add your code to a file in api/test folder (preferably mirroring existing file from api/src folder).

Refer to Mocha documentation for examples of using BDD-like DSL for writing tests.

Modules are mocked in api/test-entry.js as mocks have to be installed before any modules are loaded.

Various utility functions are provided in api/test/util.js (See other tests for examples of usage).

Build a production version of Winds by running from root directory:

To run the production JS files:

Prepare the build for Docker:

The commands above will prepare and start the API (and all workers). The frontend will still need to be started manually.

Unfortunately there is no unified standard for RSS. Go to the api directory and run yarn link to make these commands available:

Pull requests for improved RSS compatibility are much appreciated. Most of the parsing codebase is located in api/src/parsers/.

All support is handled via GitHub Issues. If you're unfamiliar with creating an Issue on GitHub, please follow these instructions.

Thank you to all of the maintainers and contributors who've helped Winds become what it is today and help it stay up and running every day. We couldn't do it without you!

RSS is an amazing open standard. It is probably the most pleasant way to stay up to date with the sites and podcasts you care about. Our reasons for contributing to Winds are explained in the blogpost Winds 2.0 It's time to Revive RSS. In this section we will list other open source and commercial projects that are having an impact on Reviving RSS: