Dashboard for monitoring pull requests and reviews across your Github repos.

Pullp is a tool to help you manage pull requests and reviews on your Github repositories, available for Mac, Linux and Windows.

An interactive dashboard shows all the open pull requests for your chosen repositories and highlights where your review has been requested. This information syncs with Github every minute! To help you keep track of things, Pullp has configurable desktop notifications to keep you in the loop. 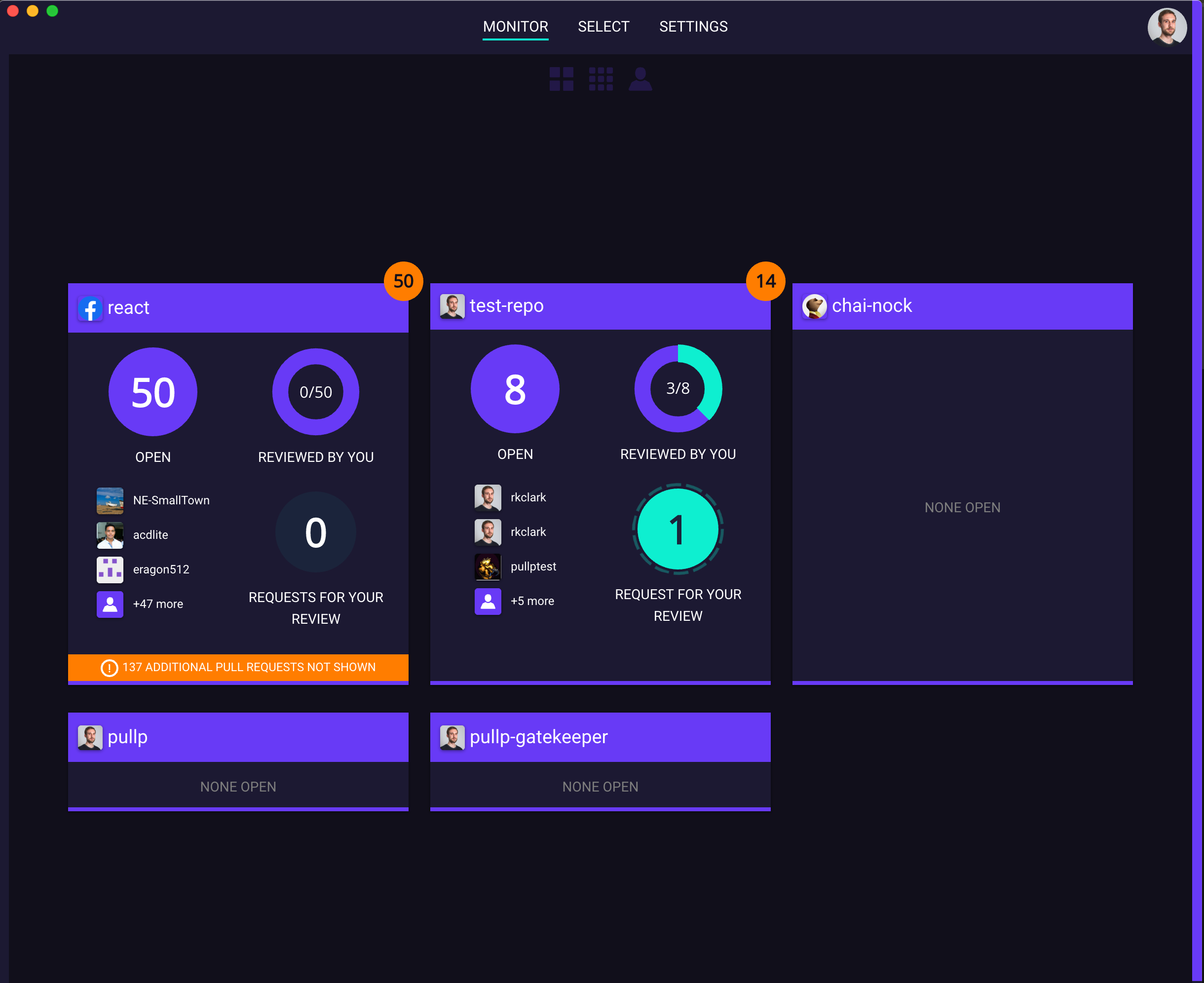 Want to find out more about the pull requests on a particular repository? Selecting a repository shows a full summary of each pull request, including all of the requested reviewers and submitted reviews. If you need to action anything, a click will take you directly to the pull request in Github. 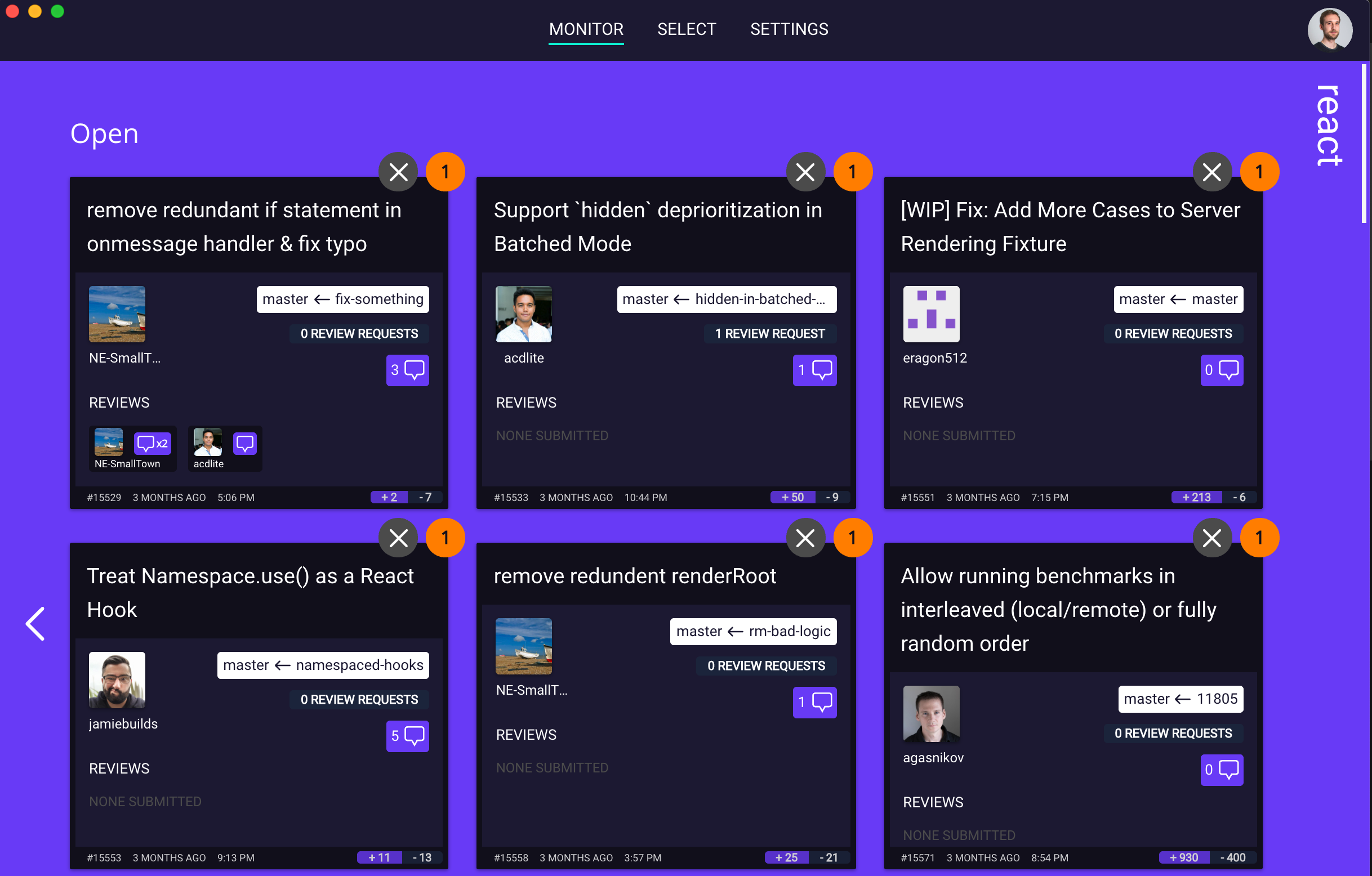 You are also shown the five most recently closed pull requests: 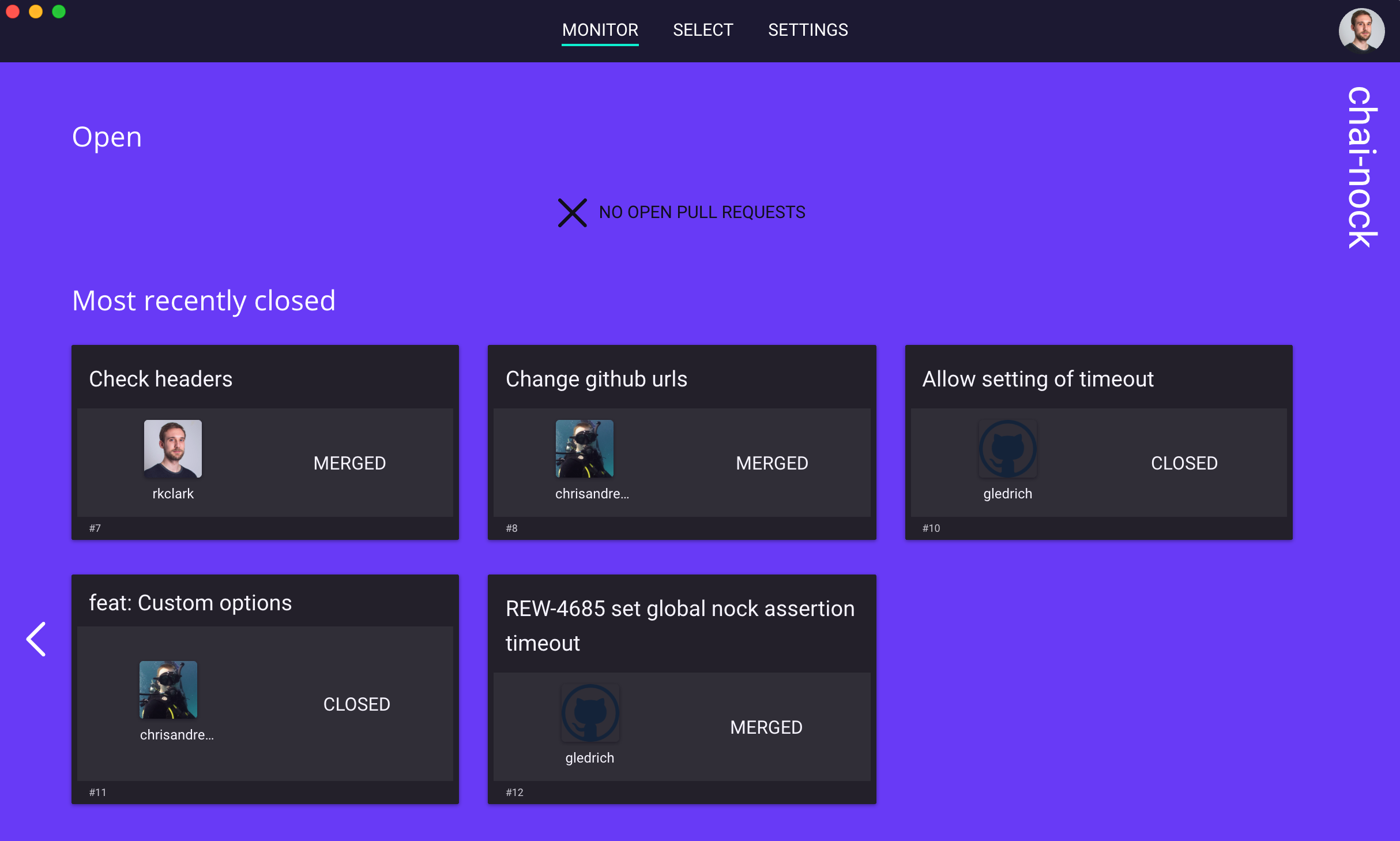 Want to change the way that Pullp notifies you of changes? On the settings screen you can toggle a number of different options: 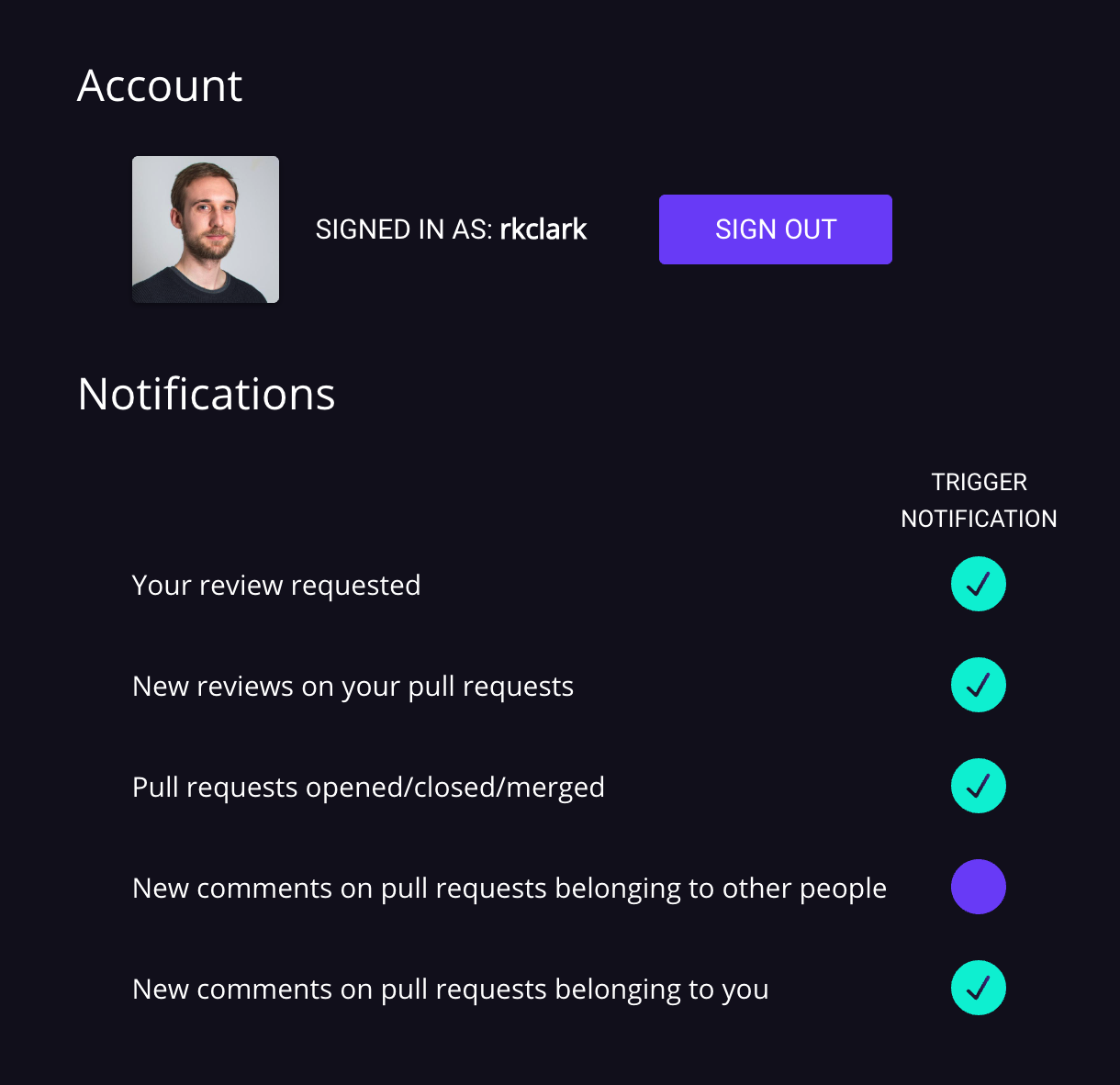 Pullp is an Electron application built with React.

Why does my repository only show a maximum of 50 open pull requests?

Github applies a cost in points to each request Pullp makes for data. Each hour you are permitted to spend 5000 points. By restricting the maximum pull requests to 50, the cost of each request is manageable. This means Pullp can make more frequent requests, giving you a more "near-time" experience. Allowing this maximum limit to be configurable by the user could be a feature in the future.

I am seeing an error saying The amount of pull request data for your selected repositories exceeds Github's maximum limit.

Github places a limit on the maximum number of data nodes that can be returned from a single request. This limit may be breached if you have selected a large number of repositories that have many pull requests. The only solution to this currently is to select fewer repositories.

Can I access the console/Chrome dev tools inside the app?

Yes! Just use the normal Chrome shortcut to open them, e.g. cmd + opt + i on Mac. React and Redux dev tools are not available in the production app, but are enabled if you are running the app in the dev environment.

I can't see my repository on the Select screen.

Make sure you are watching the repository in Github, otherwise it won't appear on the select screen.

React and Apollo dev tools will be available inside the Chrome dev tools.

Pullp uses an external auth server to complete Github sign in and receive a token for the Github API. You may want to host a local version of this server. Clone it from https://github.com/rkclark/pullp-oauth-gatekeeper, run it on the port of your choosing and then add the server URL to REACT_APP_OAUTH_GATEKEEPER_URL in the /env/.env.development file inside of Pullp.

If you are connecting to a different GitHub domain than github.com, you can set REACT_APP_GITHUB_DOMAIN to that domain such as github.mycompany.com

Your oauth server will need set of Github oAuth app credentials. To make these:

Once you have the credentials, create a new .env file in the server project root and add them as

The project includes a server that provides stub responses for all external dependencies:

To run the stub server run npm run stub. This will start the server along with the webpack dev server. Then just run npm run electron:start:dev in another terminal window.

This can be used if you want to work offline or have finer control over the data being received by the app.

Pullp uses Travis for CI/CD. This is configured so that any branch that is pushed with a name in the format vX.X.X will be automatically packaged for Mac and Linux and uploaded to Github as a draft release.

Any branch name that doesn't match will have the test suite and linter run against it.

Once the draft release is on Github it can have release notes added and then be published!