This release is meant to tide us over so that other clients can take it from here.

Thank you to everyone who contributed to this release and all the ones preceding it! Paul, Matt McKegg, and Christian Bundy first and foremost, but by now the contributors page shows 94 contributors!

Where do we go from here? Do I have to change client now?

For the time being (the next couple of months) you should be fine to just keep Patchwork running. However, as time progresses and security of the underlying components "degrades" (read: already existing issues are discovered) it will become a bad idea to keep running Patchwork. By that time, you should pick a different ssb client.

Why retire Patchwork? Can I keep it alive?

Of course Patchwork is, as always, released under the AGPL license. So if you really wanted to, you could fork it and keep it alive. However, let me (Daan) explain why this is a bad idea:

Everyone who has spent significant time in the codebase agrees that it is time to retire Patchwork. Over the years, it has seen multiple iterations of developers coming in, trying to change things in a structural way, then burning out on it. It's a pattern, so be warned. This is due to the fact that Patchwork makes some architectural decisions that make it hard to maintain, and even harder for new developers to get into the codebase:

I want to be clear that none of the above are impossible to solve; in fact, they all have straight-forward but labour-intensive solutions. I also want to be clear that these technological choices were all made for good reasons at the time, and I am sure you're as greatful to the developers who made them as I am, for putting their (overwhelmingly volunteered!) time into the project, and for making Patchwork the application that it is. In combination however, the above issues mean that new developers are faced with a very, very steep leaning curve before they're able to even make small changes. Given all of the above, it makes more sense to deprecate Patchwork and focus our efforts on projects like #oasis or #manyverse which are nearing feature parity with Patchwork. If you want to get involved with ssb development, both are great projects for that; they are much more hackable than Patchwork, and follow standard techniques & workflows, so you'll feel right at home.

If you do, against all advice, want to continue developing Patchwork then we kindly request you rename it to reflect the change in leadership.

A decentralized messaging and sharing app built on top of Secure Scuttlebutt (SSB). 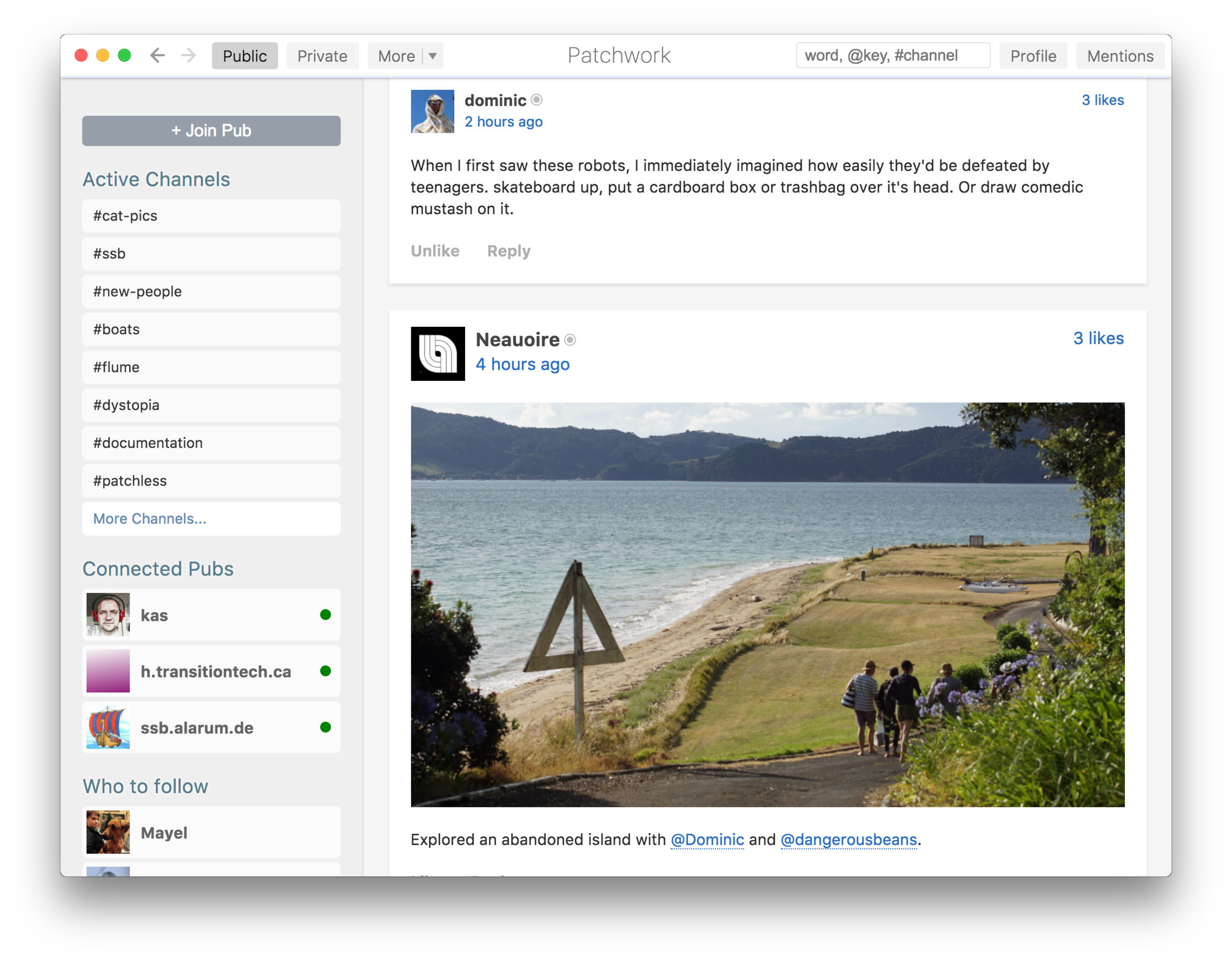 New to Scuttlebutt? Join the network by connecting to a pub.

You're done! Check out #new-people to see who else has recently joined.

Most people should download Patchwork for Windows, macOS, or Linux.

Alternatively, you can install Patchwork with your favorite package manager.

Building from source? Check out INSTALL.md for more information.

Create a new issue to report problems or request features. See CONTRIBUTING.md for more information on how to get involved. You can also support the project via donations.

Please note that this project is released with a Contributor Code of Conduct. By participating in this project you agree to abide by its terms.