There are thunsands of them in the wild. This mine is an excuse for learning Electron, Svelte and reactive programming.

You will find other installers on the releases page.

Please note that AppImage Snap and NSIS installer will automatically update to the latest available version.

If you run Mélodie from a zip or using DMG/Windows portable version, you will have to download updates by yourself.

Windows installers are not signed.

When you will run the .exe files, Windows will warn you that the source is insecure (it is not!). 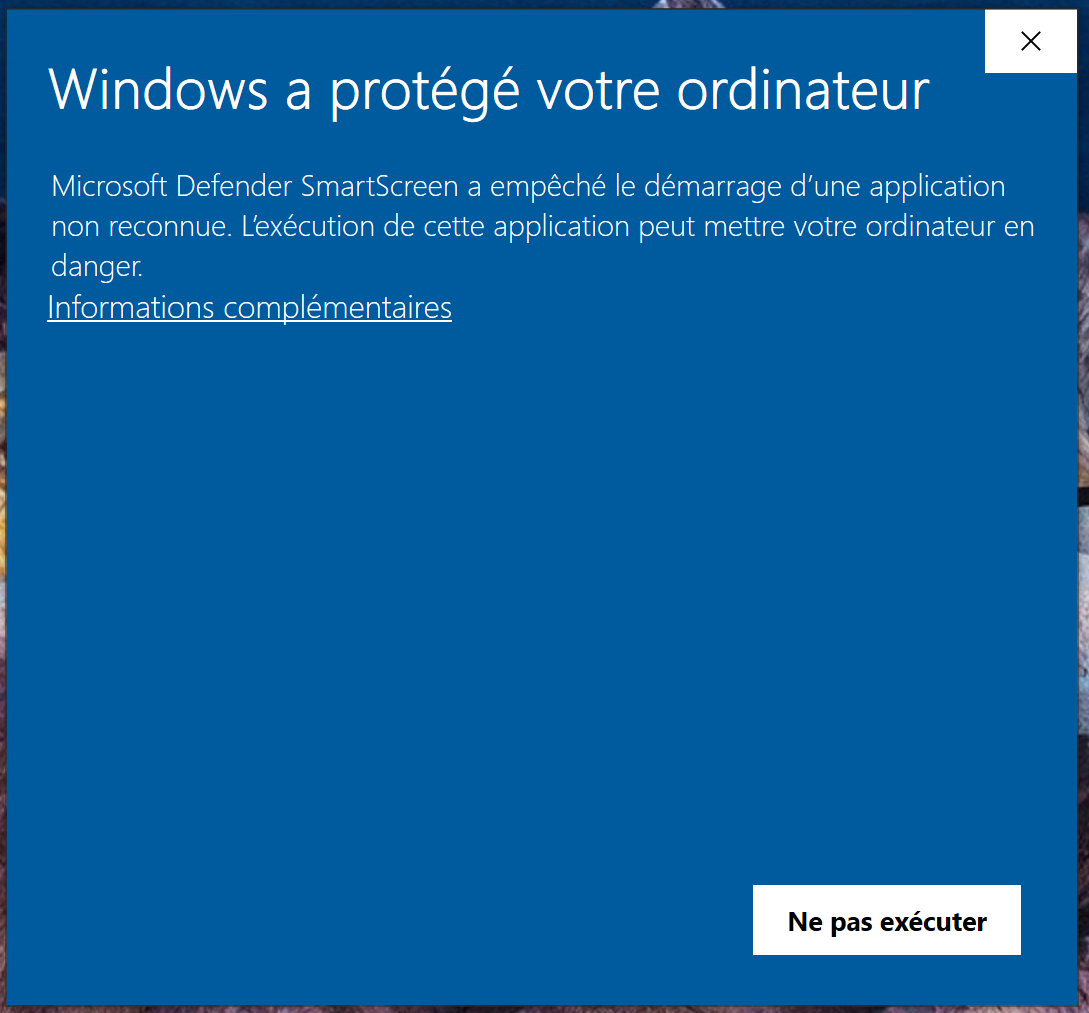 It is possible to bypass the warning by clicking on the "More information" link, then on the Install button 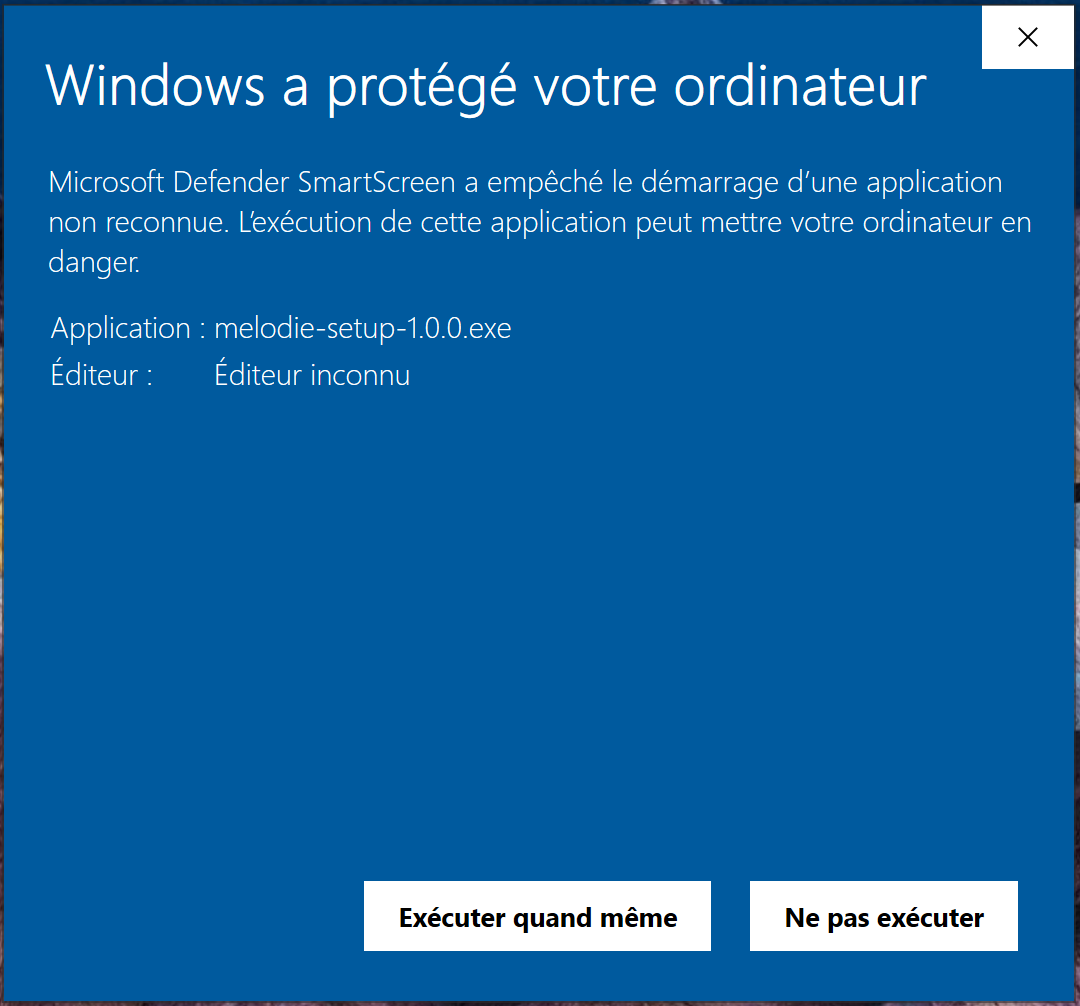 If you install the app through the Windows App Store, you'll get no warning, since the store team reviewed and approved it.

DMG image is not signed.

After you will have downloaded the .dmg file, open it and drag the Mélodie icon to the Application Icon. Then, MacOS will prevent you from opening Mélodie as I haven't paid for an app deployment certificate.

Once you will have closed the annoying warning, open you Security panel in settings, and go to General tab. There, you should see the list of recently blocked application: Mélodie should be there.

You can add it as an exception, and then run it (see: How to open an app that hasn’t been notarized or is from an unidentified developer).

Another option is to open it with Control-click: it'll immediately register the app as an exception (see: Open a Mac app from an unidentified developer).

Mélodie is using SQLite3 to store settings, playlists and tracks's metadatas. SQLite3 stores everything in a single file, named db.sqlite3 and located into the application userData folder.

Log levels are configured in a file defined by LOG_LEVEL_FILE env variable. Mélodie Desktop sets it to .levels in the application userData folder.

and levels are (in order): trace (most verbose), debug, info, warn, error, fatal, silent (no logs)

Wildcards can be at the beginning *tracks or the end models/*. In case a logger name is matching several directives, the first always wins.

Some services are hitting external APIs, such as AudioDB. As we don't want to flood them with test requests, these are using network mocks.

Some providers need access keys during tests. Just make a .env file in the root folder, with the appropriate values:

Located under apps/site, it publicize Mélodie and has a button to download latest release artifacts.

To check that generated AppImage works:

Theses artifacts will be either published on their respective store (snapcraft, Windows App store...) or uploaded to github as a release. Once a Github release is published, users who installed an auto-updatable package (snap, AppImage, Nsis, appx) will get the new version auto-magically.

Until this PR lands on electron-builder, we need to manually release on snap.

Mélodie is referenced on these stores and hubs: 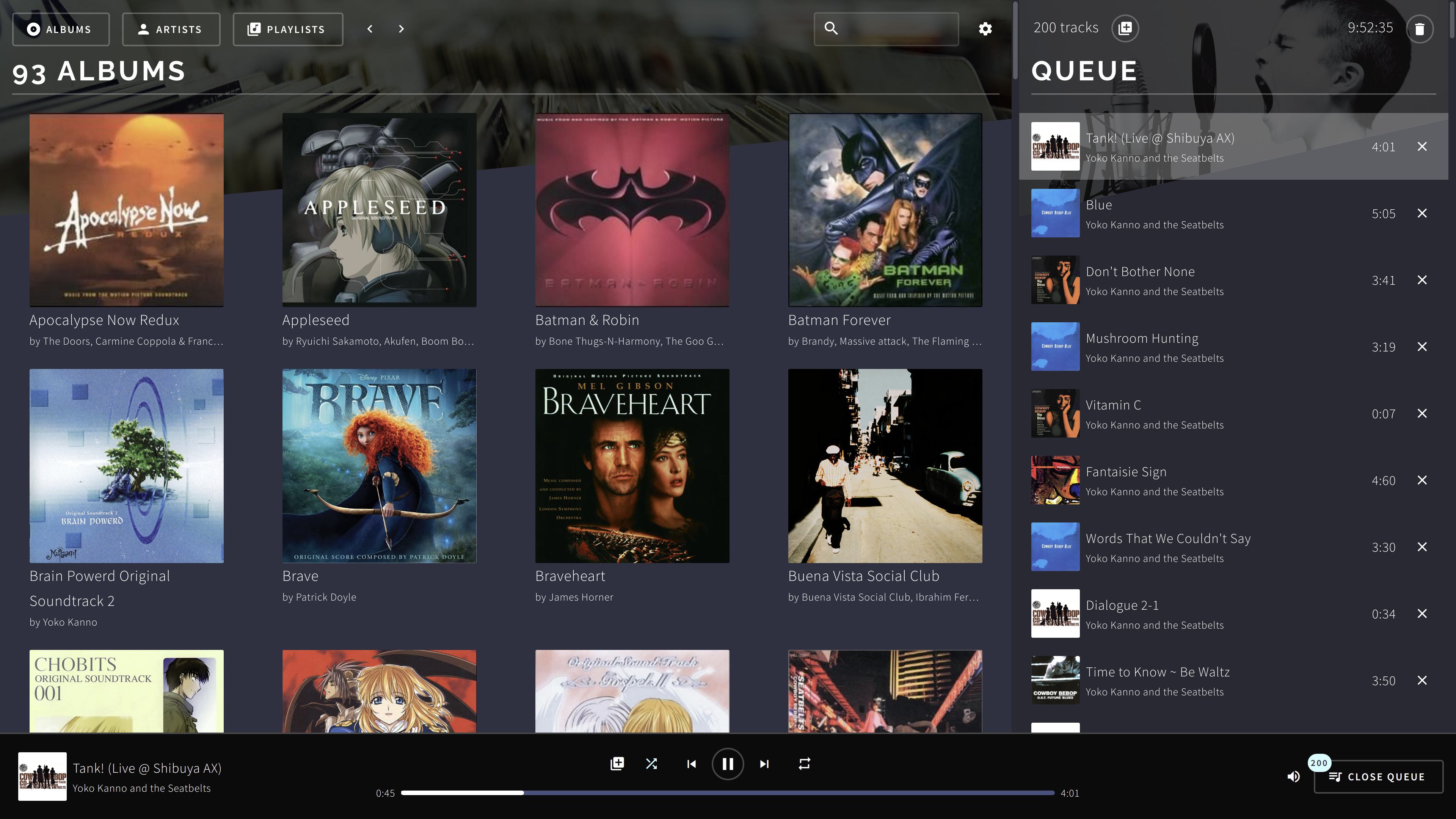 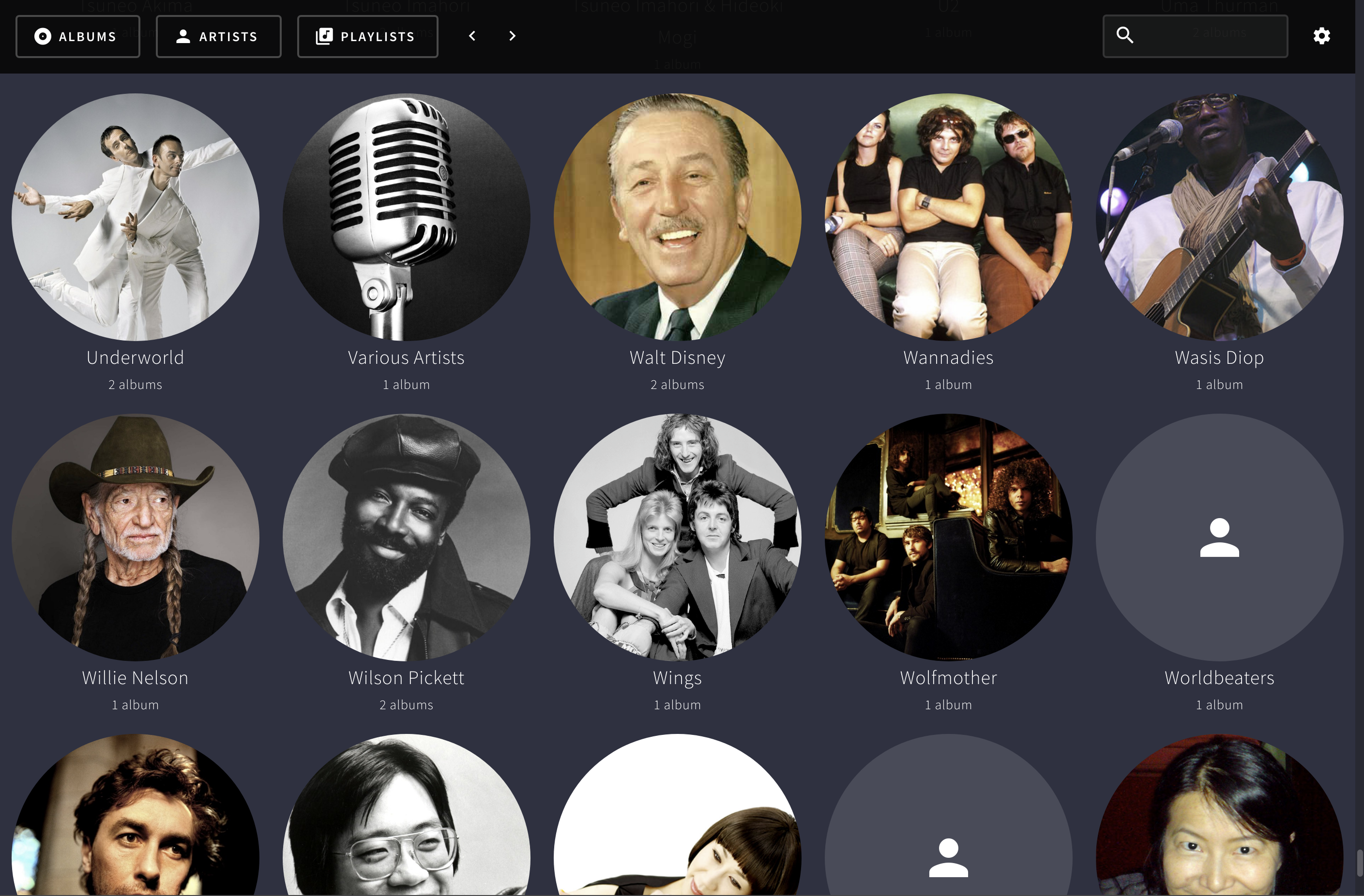 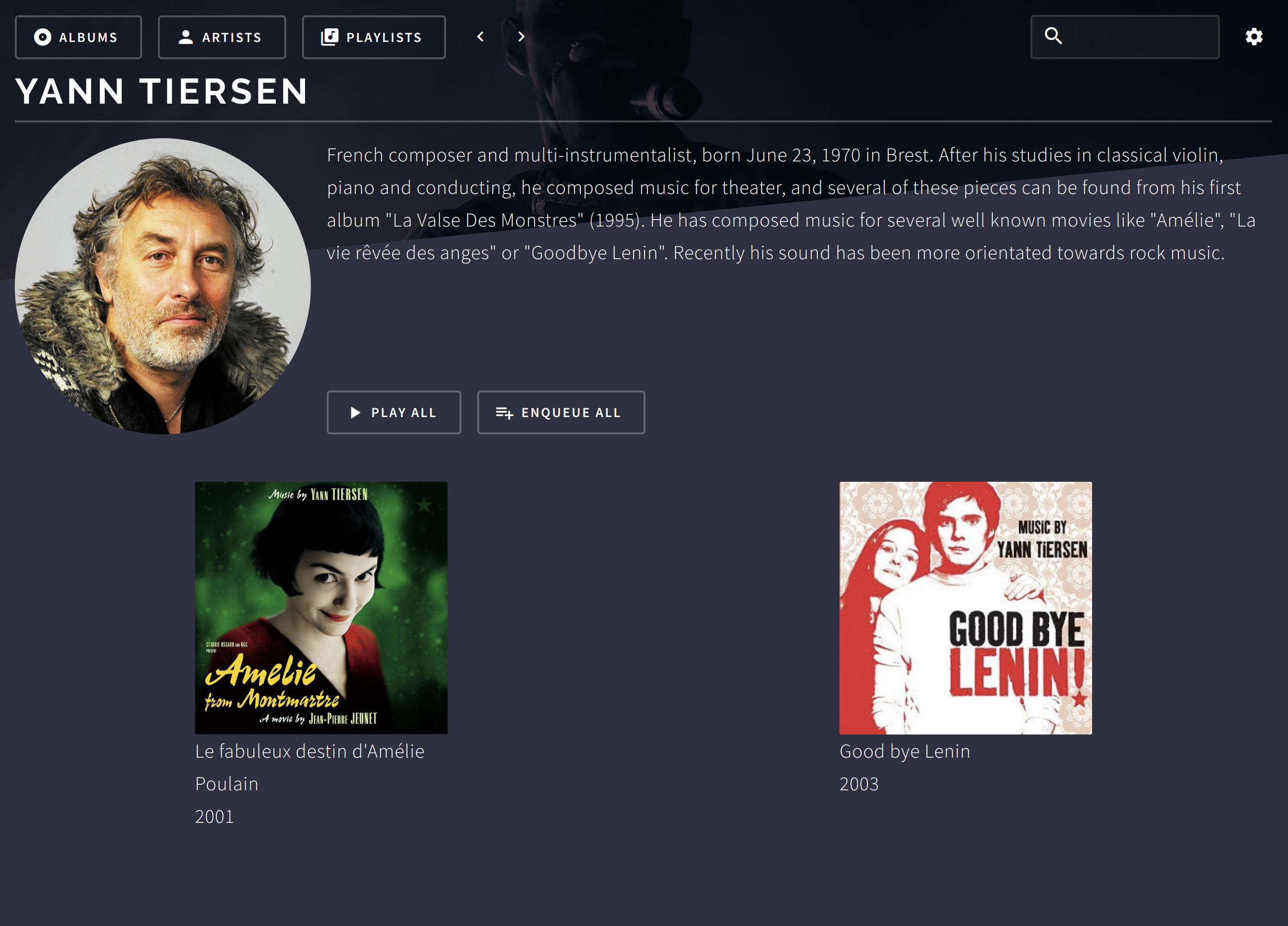