Access FalixNodes and manage your servers all from one place.

Simple and stylish to use! Access FalixNodes features such as your client and game panel, help center, phpMyAdmin, status, and more all from a centralized place.

Q: Why and what's the point of this software?


Q: Who is the developer of FalixNodes Desktop?


Q: Can I use FalixNodes Desktop?

A: It supports Windows 7/8/10/11, macOS Yosemite and up, and Linux. You may be able to run FalixNodes Desktop on a chromebook as well.

As for mobile, you can try out our mobile app, which serves the same purpose as our desktop software.


Q: Is this official software by FalixNodes?

A: Yes, FalixNodes Desktop has been approved official software for FalixNodes.

A: This is done automatically on Windows and Linux. We recommend that you wait at least 1 - 2 minutes for the update to download in the background, or depending on your internet speed.

On macOS, each update must be installed manually by the user. No, you are not required to do this on a regular basis; nevertheless, upgrading is recommended if you want the most up-to-date version in general. Given the fact that updates need the signing of the DMG file, we are already working on certifying the DMG file using our Apple Certificate.

Q: Why is Font Awesome included offline? Just use a script instead.

A: I understand that using one line of code, in this case a link to the Font Awesome script, will do the trick. Yes, you can do that, but the reason why I'm including Font Awesome locally with the software is for offline usage.

If the user is not connected to the internet, the software's icons will not load unless Font Awesome is installed locally.


Q: Why Electron and what is it?

A.1 (Why): I, Korbs, am mostly comfortable and knowledgeable with web coding languages such as HTML, CSS, and JavaScript. Using Electron was the right approach for me, and I've acquired a huge amount of experience with it over the last three years. The process of doing cross-platform support was also shortened and easier for me to do.

A.2 (What): Electron is an open-source software framework developed and maintained by GitHub. It allows for the development of desktop GUI applications using web technologie. It combines the Chromium rendering engine and the Node.js runtime. - Wikipedia

To run FalixNodes Desktop in development mode and later build it, you must have the following installed on your workstation:

It's also a good idea to have a capable code editor and be familiar with the fundamentals of the ElectronJS framework.

You should probably adjust a few additional things for Electron Builder before building.

First off, what is Electron Builder?

We can easily distribute FalixNodes Desktop cross-platform using Electron Builder, which has auto-update support out of the box. We can also distribute our software in other formats if we wanted to like Snap, MSI, PKG, etc.


What needs to be changed?

We include assets with our setup files like banners, backgrounds, and licenes. If you're planning on building your software on top of a fork of FalixNodes Desktop, it's best you change these to not confuse users who will use your fork.

Everything you need to change is located in the /build folder, also note that any files in this folder won't be distrbuted as part of the software itself. So if you were to set the software icon, and point to the icon file in the build folder, it won't work in production. The build folder is for Electron Builder only.

You need to change the following files as they may include the name "FalixNodes" or include screenshots of previous versions of FalixNodes Desktop:

A Figma file is included if you want to the same layout for the background and banner, Figma is a free tool to use.

Another thing to change is the metadata of FalixNodes Desktop like the ID, name, versions, update server location, and more.

The following should be changed in package.json:

Also if you plan to leave the settings page mostly as is, make sure to update the version number manually in there.

Now to build the actual software, this process has been made more simple over time during the development of FalixNodes Desktop, all thanks to GitHub Actions and Electron Builder.

With Electron Builder, you can simply run:

Then Electron builder will start building for your operating system.

If you desire to, or are required to, create the software for multiple operating systems, you may leverage GitHub Actions. Using GitHub Actions, you can write software on many operating systems without having to use them. You can build a DMG file for macOS, for example, without owning or having access to a Mac. Workflow files have been added and are ready to be deployed. 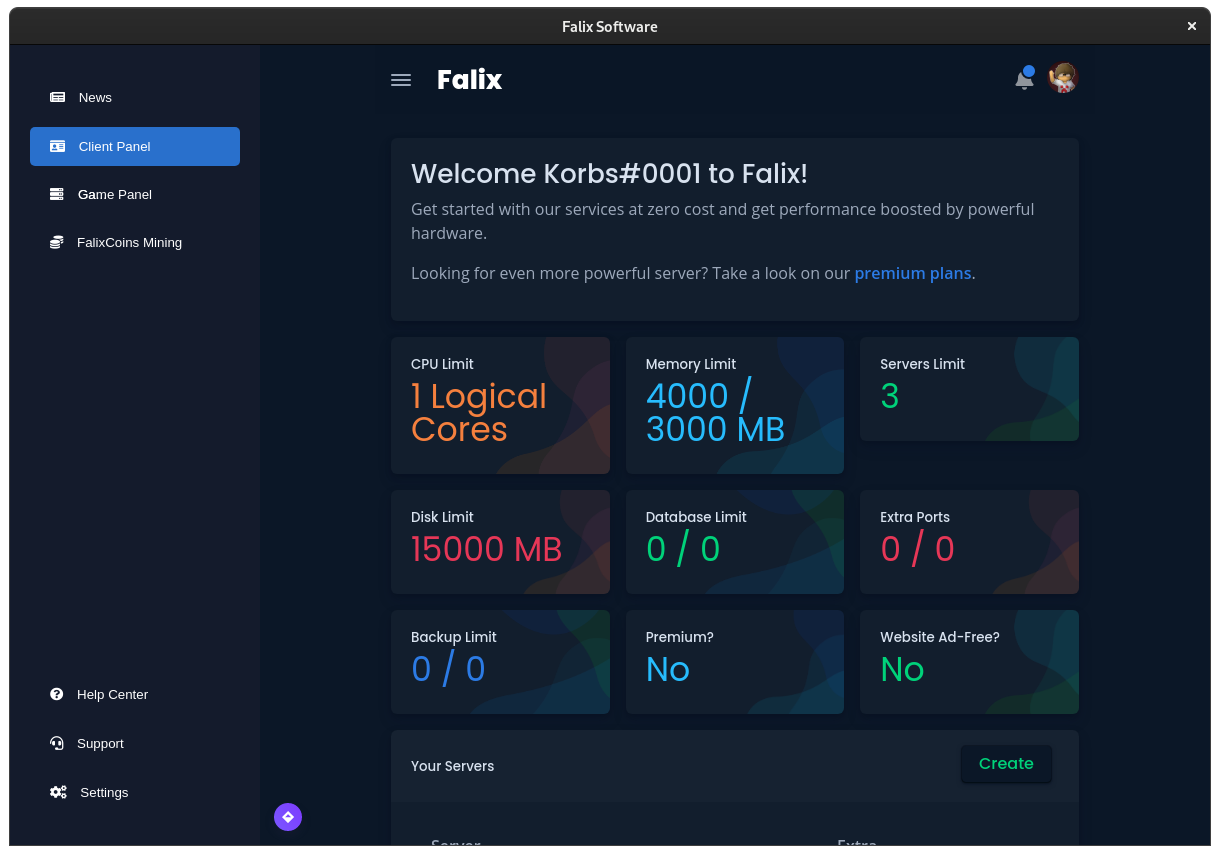