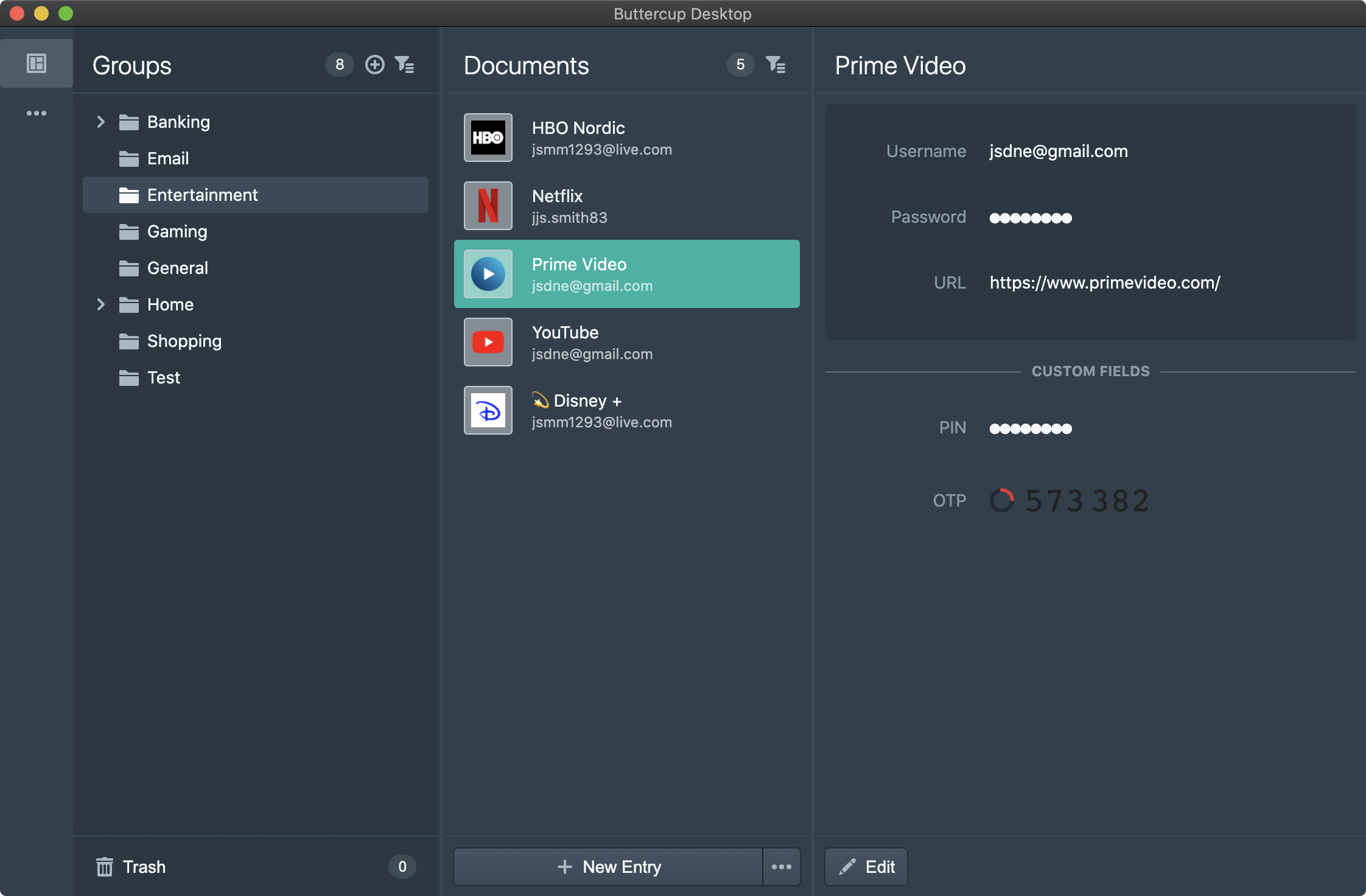 Buttercup is a free, open-source and cross-platform password manager, built on NodeJS with Typescript. It uses strong industry-standard encryption to protect your passwords and credentials (among other data you store in Buttercup vaults) at rest, within vault files (.bcup). Vaults can be loaded from and saved to a number of sources, such as the local filesystem, Dropbox, Google Drive or any WebDAV-enabled service (like ownCloud or Nextcloud ¹).

Without a password manager, such as Buttercup, it would be very tedious to manage different passwords for each service. If you remember your passwords it's a good sign that they're not strong enough. Ideally you should memorise a primary password for your vault, and not know any of the account-specific passwords off the top of your head.

Buttercup securely encrypts your data in protected files, but this security is only as strong as the weakest component - and this is very often the primary password used to lock and unlock your vault. Follow these basic guidelines to ensure that your vault is safe even if exposed:

It is very important to note that no one associated with Buttercup will ever request your personal vault or its primary password. Do not share it or any of its related details with anyone. Developers or contributors working with Buttercup may request example vaults created via your system to try and reproduce issues, but please ensure to never use your real password or store actual credentails within such vaults.

The current stable version is 2. We recommend upgrading if you're still on v1, as it is no longer being actively maintained. You can still browse the v1 source and documentation here.

Buttercup Desktop is officially supported on:

Buttercup is also available for Arch via the AUR. This release channel is maintained by our community.

Some Arch users have reported the occasional segfault - if you experience this please try this solution before creating an issue.

There are some 32bit builds available, but please note that these are not officially supported. Issues, bug reports and questions regarding 32bit binaries are not allowed and will be closed without notice. PRs to fix 32bit support are permitted.

Buttercup provides a portable Windows version. Look for the release with the name Buttercup-win-x64-2.0.0-portable.exe where 2.0.0 is the version and x64 is the architecture.

Although not explicitly portable, both the Mac zip and Linux AppImage formats are more or less standalone. They still write to the standard config/log destinations, however.

To make the most of the portable version, some enviroment variables are required:

This example stores user settings and cache on the portable folder, but stores temprory files on the host PC.

The following arguments can be provided to Buttercup, but are all optional.

Stored copies of vaults for offline use.

Logs are written for all app sessions.

Note that logs for portable Windows applications will be written to the same directory that the executable resides in.

You can view the current releases on the Buttercup Desktop releases page. Under each release are some assets - the various binaries and installers for each platform Buttercup supports. When installing or downloading, make sure to pick the right operating system and architecture for your machine.

Note that at this time, Buttercup only supports x64 (64 bit) machines.

We provide an AppImage build for Linux, because it is the most desirable format for us to release. AppImages support auto-updating, a crucial feature (we feel) for a security application. The other build types do not.

Important: Buttercup uses Electron to build its desktop application, which relies on AppImageLauncher for correct integration of AppImages into the host OS. Features like Google Drive authentication and correct .desktop icon use is only performed when integrating via AppImageLauncher. We highly recommend that you install it.

We won't be supporting formats like Snapcraft, deb or rpm images as they do not align with our requirements. Issues requesting these formats will be closed immediately. Discussion on topics like this should be started on other social channels.

To begin developing features or bug-fixes for Buttercup Desktop, make sure that you first have Node v14 installed with a current version of NPM.

Once cloned, make sure to install all dependencies: npm install. After that, open 2 terminals and run npm run start:renderer in one and npm run start:main in the other.

There are a number of ways you can contribute to Buttercup!

We welcome pull-requests and issues that serve to better Buttercup as a platform. Please remain respecful (this is free & open source after all) with your ideas and observations, and always consider opening an issue before starting on a substantial pull request.

Buttercup relies on the community for translating its interfaces into languages besides English. We use British English (en_GB) as the base language, and translate into all others that our contributors are kind enough to provide.

To add support for a language, make sure to add the translations for our vault UI first. After that, you can follow these instructions to add another language to the desktop application:

This project exists thanks to all the people who contribute. [Contribute].

Thank you to all our backers! [Become a backer]

Support this project by becoming a sponsor. Your logo will show up here with a link to your website. [Become a sponsor] 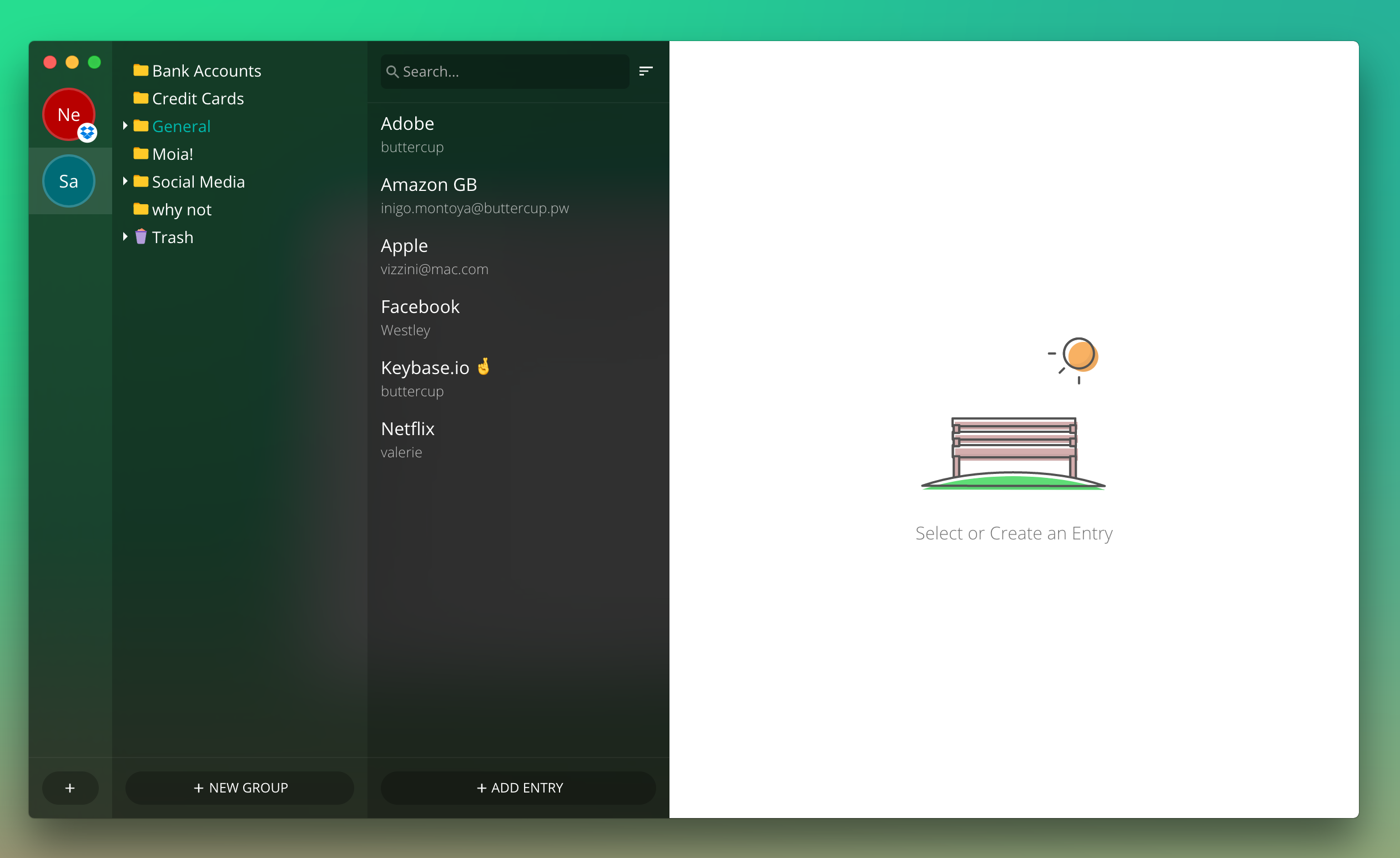