This is a light wallet that connects to a BitShares API provided by the witness_node executable.

It stores all keys locally in the browser, never exposing your keys to anyone as it signs transactions locally before transmitting them to the API server which then broadcasts them to the blockchain network. The wallet is encrypted with a password of your choosing and encrypted in a browser database.

On Ubuntu and OSX, the easiest way to install Node is to use the Node Version Manager.

To install NVM for Linux/OSX, simply copy paste the following in a terminal:

Once you have Node installed, you can clone the repo:

Before launching the GUI you will need to install the npm packages:

The dev server uses Express in combination with Webpack.

Once all the packages have been installed you can start the development server by running:

Once the compilation is done the GUI will be available in your browser at: localhost:8080 or 127.0.0.1:8080. Hot Reloading is enabled so the browser will live update as you edit the source files.

By default bitshares-ui connects to the live BitShares network, but it's very easy to switch it to the testnet run by Xeroc. To do so, open the UI in a browser, go to Settings, then under Access, select the Public Testnet Server in the dropdown menu. You should also change the faucet if you need to create an account, the testnet faucet address is https://testnet.bitshares.eu.

The UI will reload and connect to the testnet, where you can use the faucet to create an account and receive an initial sum of test BTS.

If you'd like to host your own wallet somewhere, you should create a production build and host it using NGINX or Apache. In order to create a prod bundle, simply run the following command:

This will create a bundle in the ./build/dist folder that can be hosted with the web server of your choice.

We use Electron to provide installable wallets, available for Windows, OSX and Linux Debian platforms such as Ubuntu. First, make sure your local python version is 2.7.x, as a dependency requires this.

On Linux you will need to install the following packages to handle icon generation:

For building, each architecture has it's own script that you can use to build your native binary:

This will compile the UI with some special modifications for use with Electron, generate installable binaries with Electron and copy the result to the root build/binaries folder.

Clone this repository, run docker-compose up and visit localhost:8080

This repository has a Code of Conduct that should be followed by everyone. Please read CODE_OF_CONDUCT.md

The BitShares UI is integrated with BrowserStack (https://www.browserstack.com) to allow manual compatibility testing across devices and browser versions. In the future we will switch to a automated Selenium testing framework.

Development is processed through two week milestones. There are three branches that forms the current release process.

All PRs should be pushed to the develop branch. At the end of each milestone this branch is pushed to staging. New commits are automatically deployed to this branch and published for review.

Available for browsing on https://develop.bitshares.org/

At the end of each milestone, develop branch is pushed to staging and forms the Release Candidate. The date of the RC forms the name, ie. 190214-RC*.

Application breaking issues and bugs should be submitted to the issue tracker and PRs should be pushed to staging.

Available for browsing on https://staging.bitshares.org/

When all issues to the current RC are fixed, staging branch is released to the stable master branch.

Available for browsing on https://wallet.bitshares.org/, which is the official reference wallet for Bitshares. 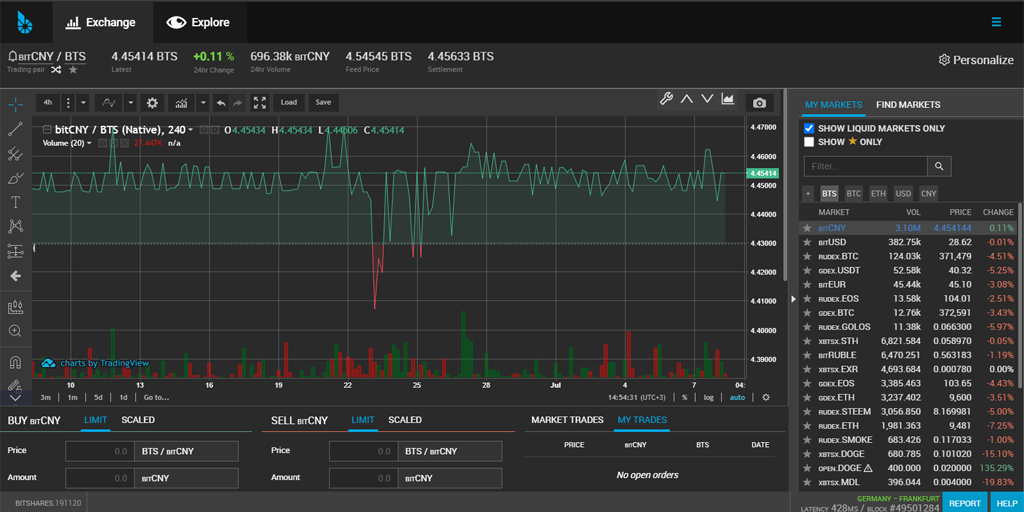