A cross-platform app which gives you the power of the Appium automation server in a beautiful and flexible UI. 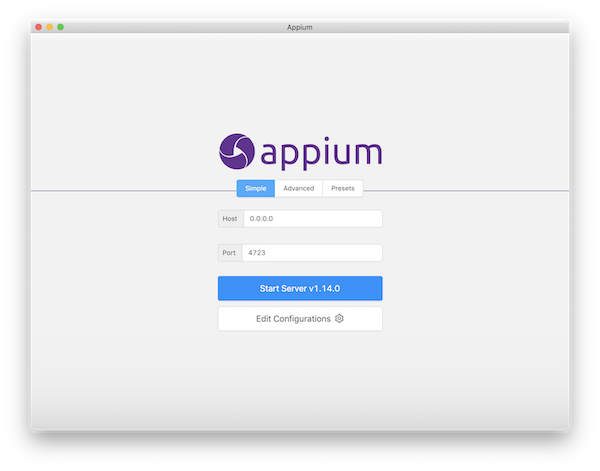 Appium Desktop is an app for Mac, Windows, and Linux which gives you the power of the Appium automation server in a beautiful and flexible UI. It is basically a graphical interface for the Appium Server. You can set options, start/stop the server, see logs, etc... You also don't need to use Node/NPM to install Appium, as the Node runtime comes bundled with Appium Desktop.

Note: an inspector UI used to be included with Appium Desktop. It is now its own separate app: Appium Inspector.

You can always pick up the latest release of the Server GUI at our Release page on GitHub.

If you're on Windows or macOS, Appium Desktop will automatically provide you with updated versions of the app when they are released. If you encounter a problem updating, simply delete or uninstall the app and re-download the latest from the link above.

If you're on macOS, you will need to install Appium Desktop apps by copying the app from the downloaded DMG file to your own file system (the best place is the "Applications" folder). Running Appium from in side the attached DMG itself is not supported, and will not work.

If you're using the desktop app on macOS, when you run it you will likely be greeted with some error about the app not being able to be opened, or not verified by Apple, or something similar. The easiest way to get around this is to run xattr -cr on the file you downloaded. So let's say you downloaded Appium-Server-GUI-mac-<version>.dmg and copy Appium Server GUI.app in /Applications inside the disk image. Then you would run xattr -cr "/Applications/Appium Server GUI.app" before opening it. The same goes for the zip version (or the .app itself).

The reason for this is that the Appium team does not have a paid Apple developer account and so our app isn't signed by a certificate they recognize, so the OS attempts to prevent it from running. Running the command above gets around this security limitation.

Please try to call codesign --deep --sign - /Applications/Appium\ Server\ GUI.app in case you gets a crash in the app starts.

These instructions assume you are already familiar with Appium and Appium-related concepts. If you are new to Appium, please visit appium.io and read our introductory material. They also assume that you have downloaded both the Server GUI and the Inspector apps.

This app provides a convenient way to download and run the Appium automation server, as well as a tool for inspecting elements in Chrome/Safari browser and your Android or iOS application. Its various capabilities are described in the following sections.

When you open Appium Desktop, you are greeted with the server start window. The basic option is to start an Appium server with all its defaults and the ability to modify the host and port. The start button will also let you know which version of the Appium server you are running, which can be useful when reporting issues to the Appium team.

Starting a server with advanced options 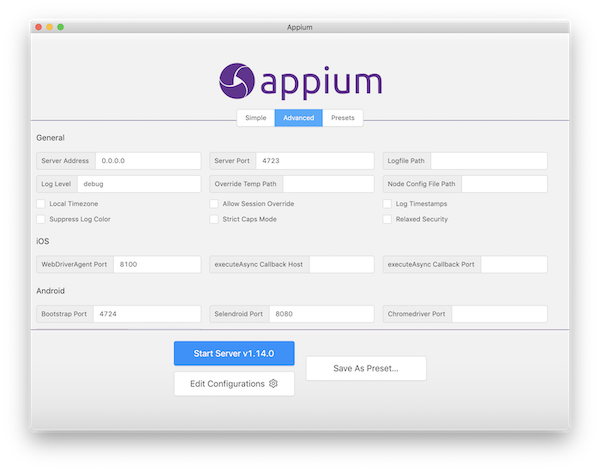 By clicking on the 'Advanced' tab, you have the ability to set all the server flags that are available in Appium. This is for advanced users and should only be modified after consulting the Appium documentation. 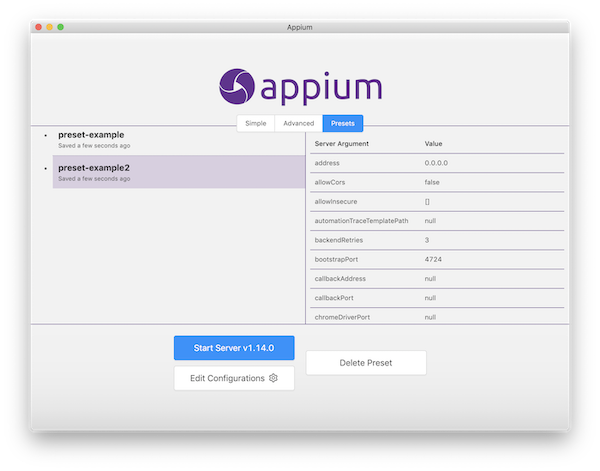 If you use the advanced server options, you have the ability to save a configuration for later use. Simply save the preset on the 'Advanced' tab, and you will subsequently be able to recall and start the server with that configuration from the 'Preset' tab.

Once you start the server, it will launch on the host and port you specified, and open a new window displaying the server log output. 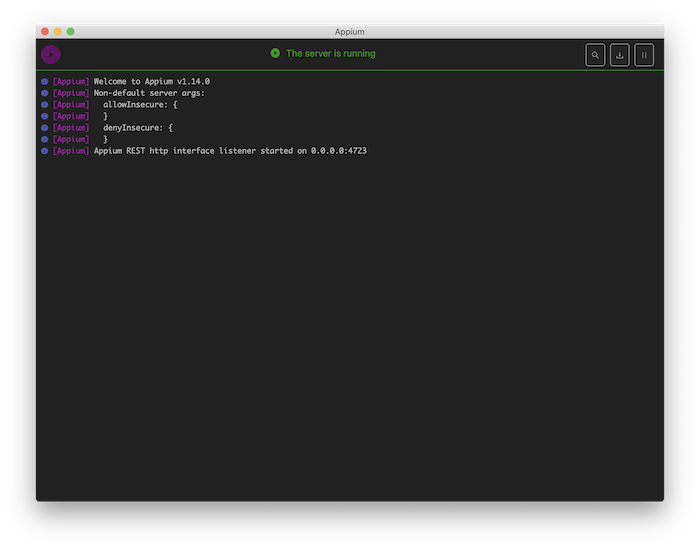 This is fairly straightforward and no real interaction is possible, beyond using the button to stop the server. You can also copy-and-paste the logs from this window which is useful in reporting Appium issues.

Warnings about being on a read-only file system

This probably means you tried to launch Appium Desktop from the downloaded disk image (.dmg file). This is not a supported mode of running Appium Desktop. To correctly install Appium Desktop, copy the application from the disk image to your local filesystem, to somewhere like /Applications. Then, run the app from that new location.

Want to hack on Appium Desktop? Awesome! Head on over to our Contributing Doc for information on how to get a dev environment set up and submit changes back to the project.